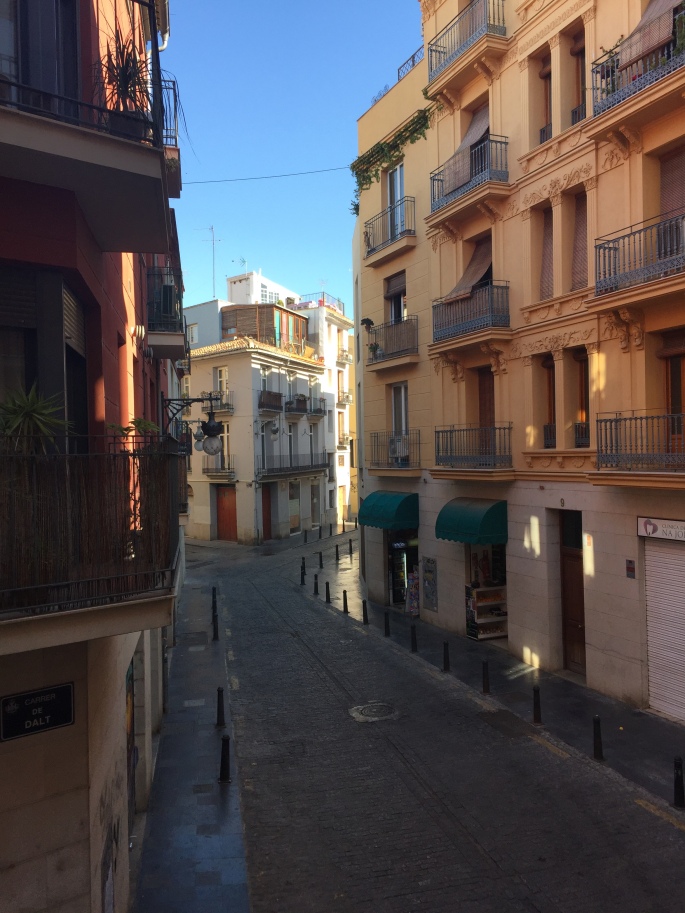 Ah, jet lag! While the flight LAX to London was the easiest, we were looking forward to a nice rest and meal in the Norwegian lounge, we were turned away at the door. “We are a contractor for Norwegian and other airlines and do not honor your Premium ticket while traveling from London to Barcelona because this leg of the journey is not Premium.”

“But Norwegian does not offer Premium on its flights within Europe,” we replied.

“Tough noogies…” or something to that effect was muttered (in a British accent).

After spending five hours in a loud, bustling Gatwick airport, we headed to Barcelona, arriving at our hotel around midnight. We had a restful night’s sleep and awoke at 11am, hurrying back to the airport to pick up our car rental, load our 120 kg of bags and onward to Valencia.

The trip was uneventful…one promise we made to one another years’ ago when traveling in strange places was to remain cool and calm…despite the fact that we often get lost and end up taking roundabouts numerous times before succeeding. It’s kind of a joke now to see how many times it takes us to find a destination—all in good fun. I often chant, “serenity, now.”

Our accommodations for the first 30 days in Valencia are very comfortable. Using the service @PerfectSpain, and working with a fellow ex-pat Anthony from NYC, we rented a small two-bedroom flat in Barrio del Carmen. It is a charming neighborhood with cobblestone streets, just a few minute walk to the Central Market and top tourist sites such as Plaza de la Virgen, Iglesia de San Nicolas and Torres de Quart.

Once we settled in, we were afraid to nap in case we’d never wake again, so we kept going until we headed out for dinner around 10:30—which as many of you know, is prime dinner hour for the Spaniards. The late evenings dinners began when Franco wanted to be aligned with Hitler’s Germany. Recently, the government has tried to return to Greenwich Mean Time, putting Spain on the same time as Portugal and UK (along similar longitudinal range). However, the working class has strenuously objected, afraid the government will do away with the afternoon siesta from 2-5 pm.

We found a small local restaurant run by two women and enjoyed tapas and drinks. Actually, all the cafes and restaurants here are small and local…no Olive Garden or Starbucks for Spain!

The Berenjena Montaña was a layering of roasted eggplant, tomatoes, zucchini “scalloped” with delicious Spanish cheese and topped with fresh herbs. Champiñon Rellanos con Gambas were mushrooms stuffed with fresh shrimp, cheese and herbs. Their best wine…$2.80€ (around $3) a glass!

While Barrio del Carmen is a lovely, charming area, being in the old part of town in an older apartment has its drawbacks. Noise is one of them. While it wasn’t terribly noisy, we are used to absolute quiet in our Phoenix home, so it will require adjusting. We are not expecting our lives to be the same as back home and welcome learning and adapting to our new life.

This morning we strolled to the Central Market to pick up fresh fruit, cheese and bread and returned to the apartment to meet our relocation assistant, Linda from @MovingtoValencia. We reviewed available apartments, discussed neighborhoods and mapped out the next few days of house hunting. The jet lag hit this morning around noon—I could hardly keep my eyes open during our meeting and took a wonderful two-hour siesta this afternoon. It was followed by a stroll through the neighborhood to check out the shops, cafes and attractions. Along our journey, we found some great street art! 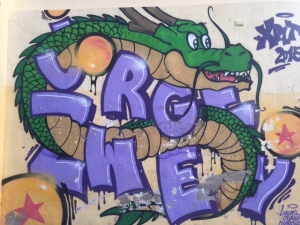 Our top priorities—continue studying our Spanish, find an apartment.

While we’d like to adjust to the late night meals, we’ll be showing up at 9 tonight to eat. We just hope there are a few local spots that will serve us this early!